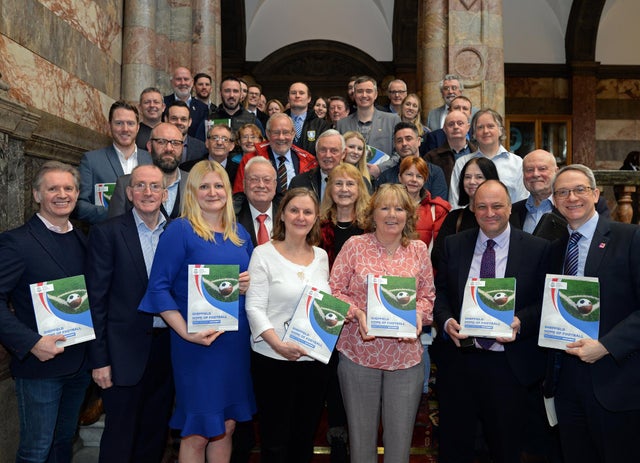 No Comments on Can you help Sheffield re-claim the ‘beautiful game’?Posted in Uncategorized By Neil AndersonPosted on 12/03/202012/03/2020

I’ve long thought Sheffield has hid its light under a bushel when compared to its more vocal counterparts in Manchester, Leeds and Birmingham.

It has been a bug bear of mine for years!

Our friends in Lancashire have built their entire image around their music and football.

Sheffield, traditionally, has been far more restrained. We’ve marketed ourselves as the ‘outdoor city’ and the ‘green city’.

All very good but it’s not the kind of thing that sets the media on fire and mobilises the 500,000+ local population.

Not when you consider the history and cultural assets the city does have – ones many other places would kill for.

So it was a privilege to be asked to help co-ordinate PR for a long overdue campaign launched at the Town Hall to finally make the city’s football credentials known worldwide.

Sheffield is lining up to ensure the world never forgets its place as the global home of the beautiful game.

Highlights of the far-reaching strategy include proposals for goalpost-style signage over the M1 motorway; sculptures celebrating contributions to the beautiful game and the launch of a Football Archive Centre.

You can read The Star’s article – they’re a partner in the project and have pledged their own campaign to get 40 plaques up in the city to recognise 40 ‘footballing firsts’ – here: https://www.thestar.co.uk/news/people/campaign-kicks-sheffield-become-home-football-2071726

I know from my 10 year project on the Sheffield Blitz that things take time. But create the right momentum with the right objectives and anything is achievable. Can you believe Coventry – a city we believed did far more than us to mark the German attacks in World War Two – have been wondering if they can emulate parts of what we have done here in Sheffield?

The Sheffield Home of Football project knows it doesn’t have all the answers. In fact it has called for help from businesses and individuals.

Can you bring anything to the table? Can you help spread the word?

You can find out more here: www.homeoffootball.net

Can you help Sheffield re-claim the ‘beautiful game’?